The sound of silence

I am lying on a worn-out mattress, in a workshop, under a large car lift. I cannot tell if I have slept, but at least my eyes have been closed for a while. Finnmark’s noisiest snoring is coming from the mattress beside me, where one of the other participants is in a deep sleep.

It’s a surreal place to wake up. Not only the location, but also our entire existence over the last few days has been well beyond what most people would describe as normal. We have covered 813 kilometres, of our first long distance Finnmark Race and now find ourselves at an old farmhouse in Sirma, in the Norwegian municipality of Tana.

The married couple that own the farm have taken a workshop and furnished it as a dormitory, with mattresses on the floor for the riders, and a large fan-heater on full blast. The fan blows hot air around the hall, drying out wet clothes, and thawing frozen bodies. Outside the door, the wind howls – as it has done day and night, since we started all this madness.

Susana, who has just woken me up, looks impatient. We are in the final push of what feels like a never-ending race. Everyone is now so tired, but we have to go on.

I climb out of the sleeping bag. The normal rituals go on autopilot: my headlamp-batteries and phone go in my jacket, snacks in my pocket, the thermos is filled up, and strong coffee is washed down to get my head and body started. I’m not hungry, it’s only three hours since I came in from the previous leg and my body feels strange, like it is trying to tell me something. However, I know very well what it’s asking for and there’s no time for that now – body and head will have to manage with a minimal amount of sleep for another two days.

I tremble and stagger – forget what day it is, where I have been and where I am going. The dogs are what make me focus and Susana, who still appears a little uneasy. Something is bothering her. She knows more than I do. She knows that there is a storm on the mountain overlooking Levajok and that several teams have had serious problems.

We can’t stay here any longer. You have to move on, now

It is obvious that she is trying to shield me from the most worrying information, but she says enough for me to appreciate the seriousness. The wind is strong and is predicted to get stronger as the evening goes on. It’s a question of getting out of here before it becomes impossible to get over the mountain.

The dogs raise their heads as I go out to them. It is sunny, but there’s quite a gale, even down here at the checkpoint. I see that the food-bowls and the dogs’ wool blankets have been blown away by gusts.

It’s nasty weather on the mountain. Several mushers have lost their way and have run into trouble. You have to be prepared for very bad conditions,

he says, making it clear that it is my sole responsibility to go out into the storm.

He tells me about people getting weather-bound on the mountain and that the wind blows so hard up there that the trail markers have disappeared, making the trail difficult to find. Susana reminds me that we have practiced a lot in stormy weather and that this is something we can manage, but I feel small. This year’s race is our first encounter with the vast plains of Finnmarksvidda. We are not familiar with the terrain, neither me, nor the dogs and we don’t know what we will find around the next corner.

The man from the race committee returns a few minutes later, clearly with new information. He now suggests that I should drive together with some of the other participants, or wait for the storm to end. I listen to both options, but I know deep down that I am going to go out there alone.

We drive out into the wind. Up above the snow line there is places where it is difficult to stand upright, but the hardest thing is preventing the sled from being blown off the track. I have to stand on one sled-runner, with all my bodyweight leant to one side and wrestle the sled against the wind.

Out on the glare ice of a frozen lake I hit the ground. I get a hard blow to my knees and then on my shoulder. All the snow is gone. Only the murderous congregation ice is left, where scrape-marks are evidence of the other competitors’ desperate attempts to brake their sleds.

I quickly get back on my feet. The dogs’ claws would normally help them grip on the slippery surface, but the booties they are wearing prevent this. Instead, they continuously lose their footing, but keep going anyway. The team skids across the ice in one large cluster while I try to keep the sled stable. A fierce gust of wind blows the sled up beside the dogs, before it crashes to a halt in a small crack in the ice and both the sled and I slam into the ground again.

Read about: the most famous long-distance sled dog races

These falls are like waking abruptly from a dream. Suddenly it is serious. I am focussed like never before in this race. There is not a moment’s hesitation in the energy I now send to the dogs. They understand, just as well as I do, that this is crucial. We summon all the power we have in our battle against the wind.

Mile after mile, I repeat one word to myself: forward, forward, forward... a rhythmic inner chanting. Like entering a trance and with only one goal: to get through the storm and over the mountain.

At the mountaintop, we hit a barrage of wind, noise and squalls of snow, but in the middle of this inferno there is a pocket of stillness. All superfluous thoughts and emotions cease. I feel absolute calm and inner peace which for the first time, directs me inwards to an immense source of power. A primal force where the dogs, nature and myself are one and we vibrate in the same unstoppable rhythm as the universe. 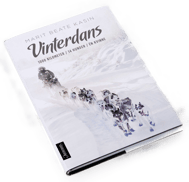 Marit Beate Kasin is a professional dog musher, journalist and writer. In her critically acclaimed book “Vinterdans”, is a narrative non-fiction book about long-distance dog mushing, she writes about the exciting adventures and stories with her dog team. The book is a must read for all dog mushing fans and those who want to learn more about what it means to participate in a long-distance dog sled race, a unique experience that bonds humans, dogs and nature.

The book Winterdance is currently available in Norwegian and German.