Joar Leifseth Ulsom, crosses the finish-line March 16th 00:18 CET. After 8 days and 17 minutes on the trail, the team is the 8th to reach Deshka Landing.

Although the race-format looked different this year compared to pre-COVID-19 restrictions, the 49th annual Iditarod, still captured the competitive excitement and action synonymous with races in previous years.

Joar & co started with bib 41 and managed to work themselves up in the lead packs, until a stomach bug hit his team pretty hard. From then on the focus was strightly on keeping everyone healthy and happy, taking one leg at a time. 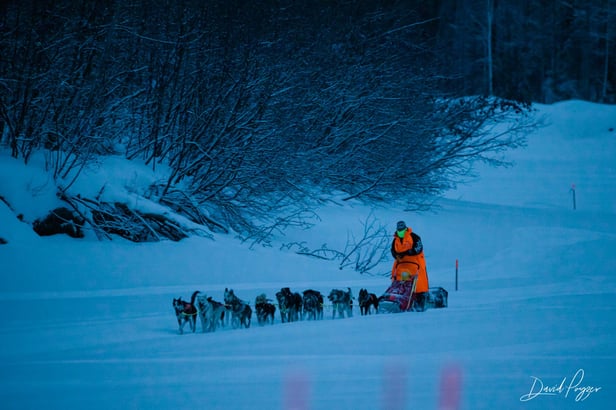 The team performed like epic adventurers despite the sickness. Joar said he had not had a single moment where he didn't feel like each pup had their full heart into it.

Joar has placed in the top 10 in all his 9 race-starts, with a victory in the Iditarod 2018. Doing a home run is not always possible, but despite some problems, the team still managed to show what they are made of.

Ever since I was a little kid, I always liked working with dogs and today I can’t picture myself doing anything else than this, says Joar

It's impressive to see how Joar shows consistency and perseverance in the performance of his team year after year. It's safe to say that mushing is something he was made to do!