My job as trainer is to ensure I introduce my dogs to situations where they feel comfortable and have the opportunity to excel.

I am constantly on the lookout for solutions to maximize the success rate during a session. Here, bulletproof routines and equipment are both crucial factors and luckily this years modified line-setup has proven to be exactly what I had hoped for.

I know that many, me included, occasionally have rough starts to training sessions, especially in the beginning of a new season. The dogs are boiling and eager to get started. In the mids of this impatience, often tug- and neck-lines becomes chew toys for excited dogs and that's when the real fun begins. You then have to get control of loose dogs, fix all the harnesses that are twisted, replace equipment, all while trying to get the team back on a straight line.

I don't wish to correct the dogs that do something wrong, I want to create a situation where wrongdoings are impossible. That way, I won't contribute to such a stressful and frustrating situation like the one described above, but rather comfort and build up their mentality. To accomplish this, I do everything I can to eliminate possibilities of doing something wrong, like chewing over a tug-line. There are many ways of doing this, however this is how I solved it: 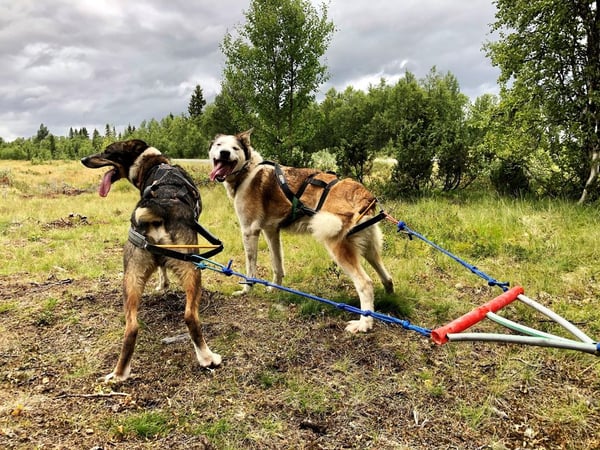 I inserted all the tug-lines into a garden hose stump, which stops any four-legged from chewing on anything. Furthermore, I changed out all the neck-lines with kevlar neck-lines. Despite many tries, no one has managed to get through those yet! Just remember to create a weak connection somewhere, which will give in if necessary.

My setup includes both stick-harness and stick-lines. Such a system is pretty normal and contributes to less pressure on hips and backs, while also helping your team to run on a straight line. 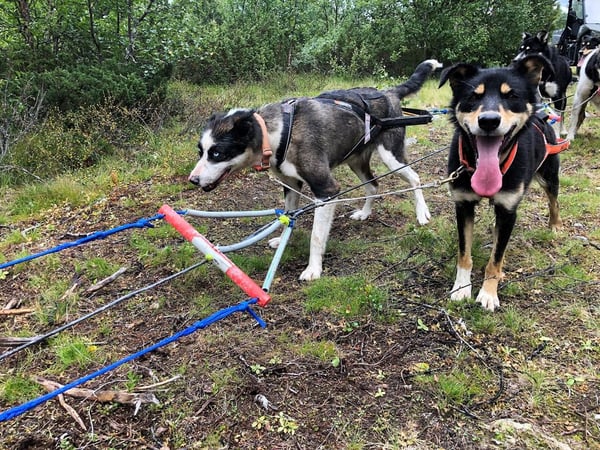 Even the serial-line chewers Vilje & Mitra have to give up

Many suppliers will have stick-harness in their product line, I am currently using those from Non-stop, however making them yourself is also very possible. What is important to remember is to keep the pull-force on the line and not the stick, if not it will break. Shorten the tug-line by 15 cm when adding stick-harness.

The tug-line we use is split in two sections, where the first part is replaceable. My setup should be rather easy to grasp if you take a close look at the two images. The hooks on the tug-line are also removed and replaced with plastic disc, which won't freeze or break.

The key factors with this setup or any other smart solution is that they contribute to success during training. We give the dogs the best conditions possible, in order for them to avoid any unnecessary stress or frustration, as well as make room for them to do what they love without too many distractions.

The art of resting