Dog mushing is a sport powered by dogs. Teamwork between dogs and musher is a crucial factor in order to succeed in this sport. If you already know how it is setup, then use this as a refresher or if you have no clue, then we hope it will be an interesting read!

Dog team members are given titles according to their position in the team, relative to the sled and musher. These include Wheel dogs, Team dogs, Swing dogs & Lead dogs.

The wheel dogs are usually the strongest, as they are the ones pulling and steering the sled. They are positioned directly in front of the sled. A good wheeler must have a relatively calm temperament, so as not to be frightened by the sled moving just behind.

The team dogs could also be called the “horsepower” of the group. They help turn the sled and maintain speed. Team dogs are positioned after the wheel dogs and before the swing dogs. Depending on the size of a dog team, one can have up to six or more team dogs on the sled. Alternatively, the term could be used to describe any dog in the dog team. 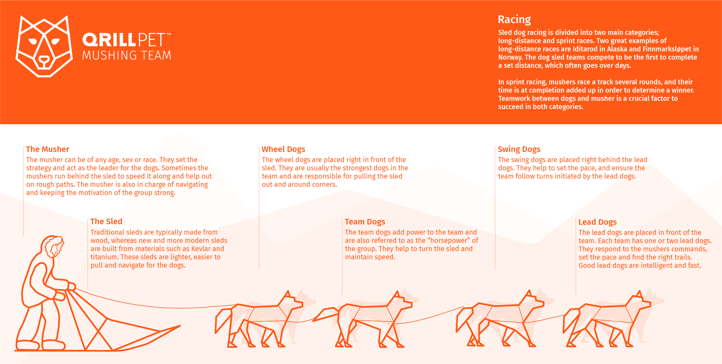 The swing dogs help set the pace, and ensure the team follow turns initiated by the lead dogs. Further identified as right or left swing, depending on which side of the tow line they are positioned.

The lead dogs are positioned in the front of each team. Leaders may be single or double, the latter being more common now. Their job consists of responding to the mushers commands, set the pace and ensure correct direction. Sometimes a leader may be unhitched (a loose or free leader) to find the trail for the rest of the team under bad conditions. This practice is uncommon and is not allowed during races. Qualities for a good lead dog are intelligence, initiative, common sense, and the ability to find a close to non-existing trail.

Refresh your vocabulary: TALK LIKE A REAL DOG MUSHER

To finish off, it is important to emphasize the importance of each role the dog can have in the group. A musher relies on all, in order to have a well functioning team during a race, big journeys or training. As earlier mentioned, dog mushing is based on teamwork and the special relationship between the musher and the dogs. Dog mushing is truly unique in that sense.

Do you want to get to know the team better?