Dallas is a third-generation dog musher. In 2005, he competed in his first Iditarod race and became the youngest person ever to finish the grueling 1,000-mile race. In 2009, he started his own racing kennel and actively began the pursuit of his lifelong dream of becoming an Iditarod champion. 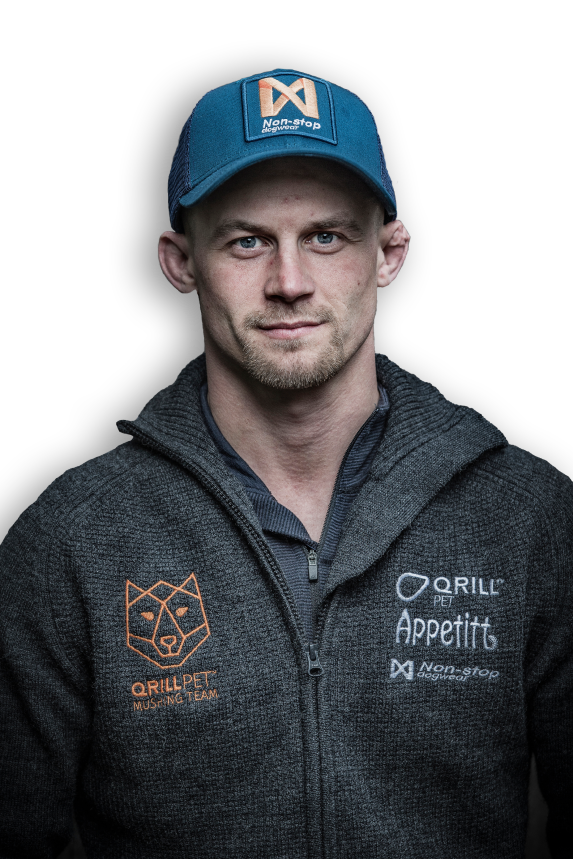 Dallas is a third-generation dog musher. He grew up helping his father prepare his racing teams for the Iditarod Trail Sled Dog Race. In 2004, Dallas’ father Mitch, won his first Iditarod and Dallas was hooked. In 2005, he competed in his first Iditarod race and became the youngest person to ever finish the grueling 1,000-mile race at age 18.

In 2009, he started his own racing kennel and actively began the pursuit of his life-long dream of becoming an Iditarod champion. His dream came true in 2012, when he at age 25 become the youngest ever winner of the Iditarod race. Dallas is now a 4-time Iditarod champion and has twice broken the race’s speed record. He has also won the 1,000 mile Yukon Quest, making him one of only 6 people to ever hold a title in both races.

Besides dog mushing Dallas has a history in wrestling at state and national level, including one year at the U.S. Olympic Training Center. Due to one too many concussions he had to stop, which led to a change in his career goals and eventually becoming a professional dog musher. Today, Dallas lives in Talkeetna, Alaska, where he runs his kennel and runs the AK Sled Dog Tours.

GET TO KNOW SOME OF THE ATHLETES

Bishop is a young superstar lead dog, with a quite unique character. He runs at about 45 degree angle, he twists his butt out really far to the side. This does not stop him from working very hard. Just like every mushing dog, Bishop just has his own little quirks.

Rapid is one of Dallas' most happiest dogs on the team. Although he slightly built like a brick, when it comes to running and travelling down the trails, he is pretty much perfect. He just has so much positive energy.

Gamble is the stand out lead dog of his generation. He is one of the more serious dogs in the team, almost a bit business minded. Maybe, because he has a lot to live up to, with both his parents been part of Dallas' first Iditarod champion team in 2012.

Ripple, the lady in the team, is happy and playful most of the time. She just loves having a good time, and does not shy away from engaging in just about every bad habit a sled dog is capable of. When on the trails, she becomes unbeatable and puts on her best performance.

I knew I wanted to do professional dog mushing when... It's hard to say exactly when I decided that I wanted to spend my life living and working with sled dogs. It was probably when I ran my first Iditarod (I was 18 at the time) that I truly realized the depth and complexity of the sport as well as the immense sense of pride and accomplishment that comes from developing an amazing team and those are the reasons that I have made this sport my life.

My most memorable racing experience is... This is a tough one! If I had to pick one moment it would be the first time I won the Iditarod though. It was the culmination of a lifetime of working towards that goal for me and the sense of pride I felt in what that team of dogs had become, as individuals as well as a team, was absolutely overwhelming!

My goal for the next five years is... The same as the last five years, to learn as much as I can about this sport and to grow as much as possible as a musher.

If I didn’t do what I am doing today, I would...Hmmm.... Sounds like a good problem to solve tomorrow.

4th place at the Iditarod race

4th place at the Iditarod race

Yukon Quest Champion - Rookie of the year & Youngest to win

Youngest to ever finish the Iditarod race at age 18

He was the highest ranked junior in the wrestling World Tour.

At a young age Dallas was wrestling competitively and turned heads at the state and national levels. He was the highest ranked junior in the wrestling World Tour. Dallas was however forced to retire from wrestling at age 19, due to one too many concussions. This was a turning point in his life, which kick started his mushing career.

The sport of dog mushing

The role of a lead dog

Read more in our stories

The sound of silence

Read more about it
Read more in our stories